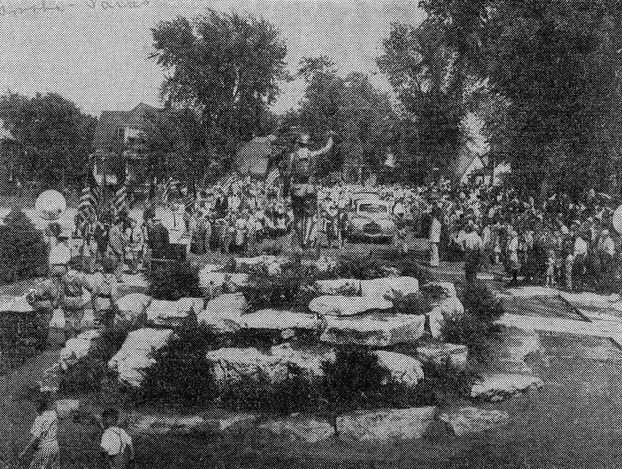 Formerly in Highand Park near intersection of C Street and South 25th. The statue no longer exists.

Photo: Omaha World Herald.
Dedicated May 30, 1941 in South Omaha's Highland Park. The left hand and rifle were stolen in April 1942 (left) and what remained of the statue was contributed to a WWII scrap metal drive in 1944 according to Viquesney researcher Earl Goldsmith. But a newspaper article in 1974 says the statue had disappeared by around 1959. There was also a plaque, but it's unreadable in the old newspaper photo, so there's no information as yet as to what was inscribed on it.  There appears to be a Veterans of Foreign Wars emblem at the top.

The sculpture, for which most of Highland Park was redesigned to obtain a proper setting, was formally presented to the city in a combined military and civic ceremony.

More than one thousand people witnessed the rituals performed by the Rudolph Deml post, Veterans of Foreign Wars, and heard speakers consecrate the monument as a tribute to the war dead and a reminder of the responsibilities of the living.

Made possible by a campaign conducted by the Rudolph Deml post and the Highland Park Improvement Club, the statue was turned over by Mace Brown, club president, to Park Commissioner Roy Towl, who in turn presented it to Mayor Butler for the city. It was accepted on behalf of citizens by Philip Klutznick, attorney.

Ceremonies were preceded by a parade from South High School to the park at 25th and C Streets. In the line of march were General Uhl and his aides, Mayor Butler, members of the five local VFW posts and auxiliaries, representatives of the Disabled American Veterans, United Spanish War Veterans, American Legion posts, American War Mothers, the South High School band, Union Pacific and Melting Pot Legion drum corps, and representatives of 23 South Omaha civic bodies.

Our thanks to Lynn Sullivan of the Omaha Public Library for her research which revealed three old Omaha World Herald articles containing photos which confirmed this statue to be a Viquesney.  Although one of the articles describes the statue as "bronze", this is one of Viquesney's 1934 copyright models made of cast zinc. One of the finishes available was a thin bronze coating which made the statue appear to be made of bronze, and it was this fact that caused the Federal Trade Commission in 1936 to ban Viquesney from using the term "cast bronze metal" in describing this model.