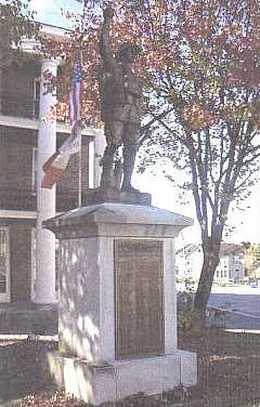 Located in small Legion Memorial Park in Town Center at the Emmit House, at end of "V" intersection of W. Main Street and Frailey Rd.

The Emmit House behind the Doughboy, once a hotel, is now an apartment.  The area where the Doughboy stands was once a watering hole for cattle and horses, and later a public fountain. The land was donated by Mrs. A. M. Kalbach of Lancaster, Pennsylvania at the time of the Doughboy's dedication and became known as the Legion Memorial Plot.

The Doughboy was paid for by public subscription and its dedication at 3 p.m. on Saturday, May 28, 1927, was attended by a crowd that included many local dignitaries. The Emmitsburg Coronet Band played at the event and the principal speaker was Emory L. Coblontz of Frederick, Maryland. The Doughboy was unveiled by Mary Rowe, whose son, Charles, was Master of Ceremonies.

The 135 names on the plaque include only those from Emmitsburg. Many others served during the war from nearby locales. The American Legion and its Auxiliary place floral tributes at the base of the monument on Memorial Day and Veterans Day. The Town of Emmitsburg maintains the ground and the Emmitsburg Historical Society is responsible for the American Flag at the monument.

The Doughboy suffered major damage when an earlier base was completely destroyed by an automobile in 1970. The American Legion led a community project to restore and clean the Doughboy and build a new base. The bayonet was finally replaced in about 1990. The sculpture is in relatively good condition.

Update June 19, 2015: A driver lost control of her car in the rain and smashed into the monument. The statue was undamaged, but the base was broken into pieces. Repairs are underway, and there are plans to move the statue, subject to local public approval. 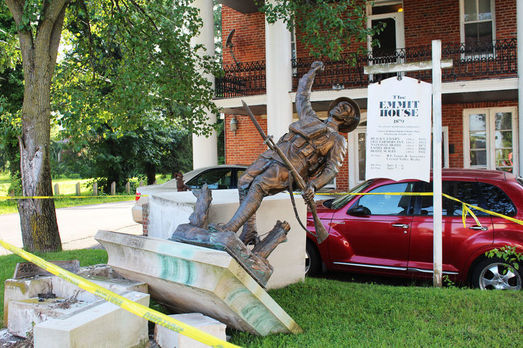 Photo courtesy of The Frederick News-Post.
Update July 6, 2015: Local resident Bob Rosensteel lead a move to have a new plaque installed which includes all the names in alphabetical order without regard to race. The current plaque lists three soldiers at the bottom as "colored".

Update August 1, 2015: Veterans and members of the local VFW and American Legion rejected any proposals to change the location of the statue or wording on the plaque.

Update December 7, 2015: A low bid of $40,000 for repairs was accepted by city commissioners, and it was decided to keep the old plaque. A second plaque, to be placed next to the original, is being considered.

Update March 16, 2016: The cleaned and repaired Doughboy was returned on a new limestone pedestal. The stone came from the same Indiana quarry as the destroyed original.

Update May 28, 2016: The statue was rededicated. Among the attendees was 99-year old Eugene Zacharias, who was present at the original dedication on May 28, 1927.