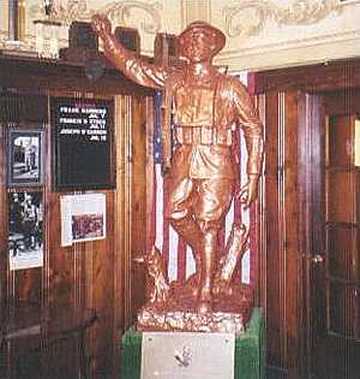 In lounge of Funkhouser American Legion Post No. 8 at 6001 New Harmony Road. 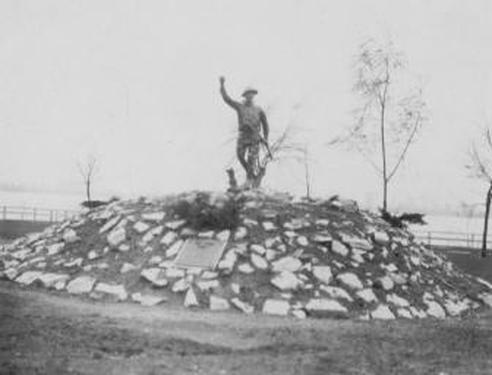 The Doughboy on its original mound in Sunset Park, with the Ohio River in the background.

The 1937 Ohio River flood that washed
away the Doughboy and its mound.
This Doughboy has had a very troubled history. It was originally dedicated standing on a large circular mound in Sunset Park near the Ohio River and downtown Evansville. The mound was washed away in a major 1937 flood and the Doughboy and its plaque were lost for a period of time. After they were located and placed back in the park, the Doughboy suffered substantial vandalism until the city warehoused it in the 1950’s. The plaque was lost again at that time. In 1961, Laura Kerby, a dedicated member of the Funkhouser American Legion Post, wondered what had happened to the statue. She learned it was in some material that was about to be junked. She undertook to save it, and obtained the permission of the City of Evansville and of the Kiwanis Club, the original donor, for it to be entrusted to the Post. It was moved there and placed outdoors on public exhibition in 1961. The plaque was located in 1985, found in items being donated to the Vanderburgh County Historical Society. It was taken to the Post. 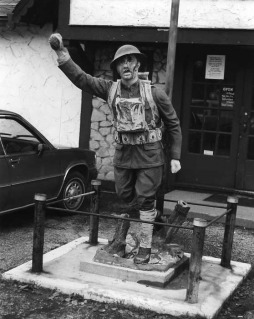 By the late 1980s, the statue was in
terrible shape. Photo: Evansville Courier.
The statue suffered more vandalism and was repaired several times. In 1968, it was repaired with parts from a body shop and a new left was fashioned from a department store mannequin. Vandalism and repairs continued until the post was advised that if it remained outdoors, it could no longer be insured. It was then moved indoors. A new rifle was fashioned in 1998, but it is now slung over the right shoulder instead of being held in the left hand.  The statue now stands in very good condition in the corner of the lounge on a base that holds the plaque.
The Doughboy has been the object of unwarranted controversy. It’s been suggested that the lounge location is improper for a memorial and that it should be placed at the James Gresham house in Evansville’s Garvin Park. (James B. Gresham of Evansville, with Merle Hay, of Glidden, Iowa and Thomas F. Enright of Pittsburgh, Pennsylvania, were the first three members of the A. E. F. killed in France – in a quick German raid early on November 3, 1917. The Gresham house in Garvin Park is a memorial.)

The post’s ownership of the Doughboy has also been questioned. The post’s position is that it was granted ownership when it obtained permission from the city and Kiwanis to save it from being junked, and if the post hadn’t saved it, it wouldn’t now even exist. As for placing it at the Gresham house, the post’s belief is that if that were done, it would merely be exposed to more vandalism. It is quite apparent that the post does not intend to move it.