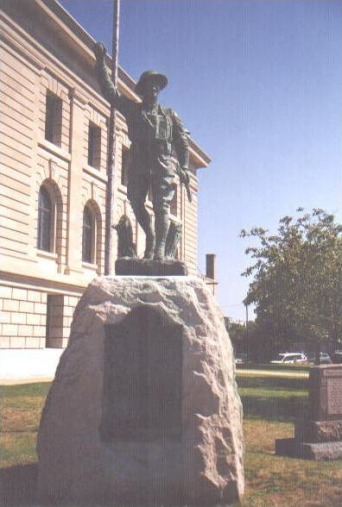 Dedicated November 11, 1930.  The rifle sling is missing. The Doughboy suffers from pitting and quite a bit of discoloration. The base is stained. The Doughboy could benefit from a cleaning, treatment that does not chemically damage the sculpture’s metal, and could probably benefit from other restorative work.

American Legion Post 14 purchased lights for the area in 1987 to combat vandalism.

Update August 2015: The statue was taken down for a cleaning and refurbishing under a project headed by local father-and-son team of Jeff and Caleb Staker. The work was done by Crucible Foundry of Norman, Oklahoma.

Update November 11, 2015: The refurbished statue was unveiled for Veterans Day.