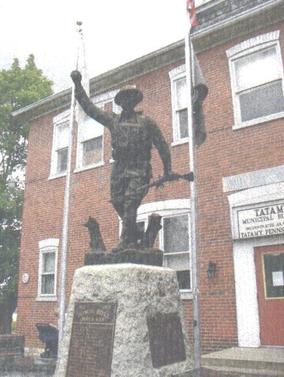 A plaque on the Doughboy’s right side of the base reads:

MEMORIAL
ERECTED
BY THE CITIZENS
OF TATAMY
AND COMMUNITY
1923
A plaque on the other side of the base is not visible in the photograph furnished.

The Doughboy was dedicated November 11, 1923 at the intersection of Bushkill and Main Streets. It was unveiled by two small girls, Mabel Bartholomew and Lena Clewell, along with Joseph Butz, who led the movement to acquire it. The covering was received and folded by Floyd Butz, who had served in the war.

Due to the number of auto accidents involving or related to the Doughboy, it was moved in February 1941 to a concrete foundation on the east side of the public school building, which is now the Municipal building. A substantial renovation project was undertaken in 1979 and the Doughboy was rededicated Memorial day, 1980. It was rededicated again on Memorial Day, 1993 after in had been moved again to the front of the building when the new memorial area was built.

The Doughboy appears to be in reasonably satisfactory condition, although the rifle sling is missing.

This genuine Viquesney Doughboy was erroneously reported as a non-Viquesney statue on T. Perry Wesley's 1991 Doughboy report, but the error was later corrected in a 1992 update.