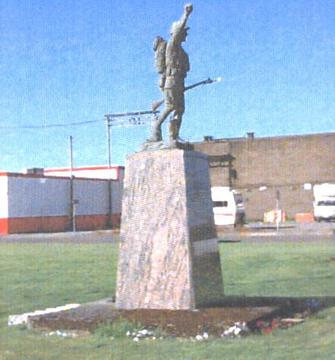 In Zelasko Park near downtown Aberdeen, standing about 60 feet from Wishkah Street in the 200 block of South “F” Street.

The engraving on the marble base reads:

THE SPIRIT OF THE
AMERICAN DOUGHBOY,
WHO IN PEACE REPRESENTED THE
IDEALS OF A NATION OF FREEMEN, AND IN THE
WORLD WAR FEARLESSLY FACED DEATH IN DEFENSE
OF HUMAN RIGHTS AND LIBERTY.

CHERISHING THE MEMORIES OF
THOSE WHO FELL, AND WITH GRATITUDE TO THE
SURVIVORS OF THE NATION’S CONFLICTS, THIS STATUE
WAS ERECTED BY THE VETERANS AND PATRIOTIC
ORGANIZATIONS OF ABERDEEN WASHINGTON.
JULY 4, 1926 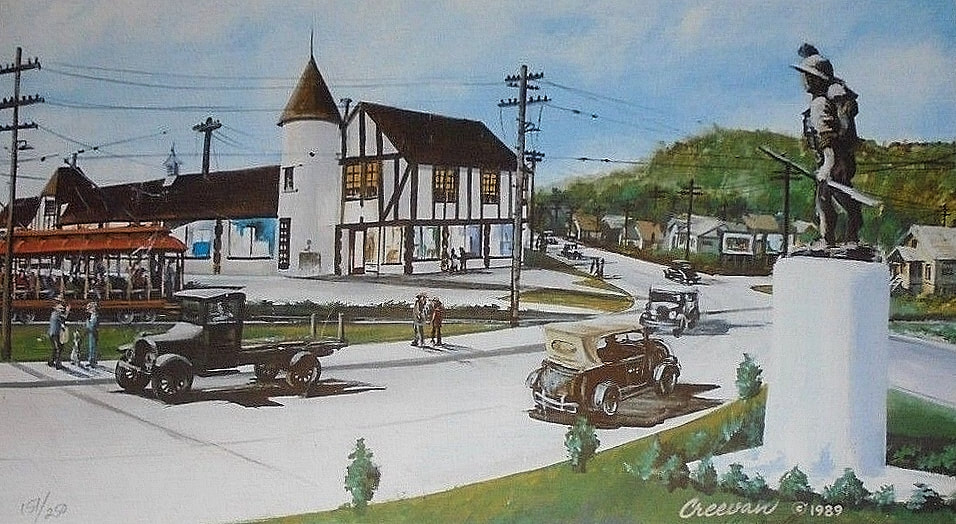 Above: A detail from a 1989 Dick Creevan painting portrays the Doughboy's original location circa 1928 in a small triangular plot at Simpson and North Park Street, across from the old Ice Palace. The statue was moved and rededicated at its current location in Zelasko Park March 4, 1961, since its heavy base was crushing the wood culvert it stood over. The original engraving was re-engraved on the new base. The VFW and Auxiliary, American Legion and Auxiliary, Military Order of the Purple Heart, Gold Star Mothers, and other patriotic organizations participated in the rededication. Many had also been involved in the original dedication. The Doughboy was cleaned and restored, and the bayonet was replaced, while the new site and base were being prepared.

The landscaped park contains rest benches, a World War II pack howitzer with a plaque, a flag pole, and large woodcarvings of a logger and a bobcat. It is the focal point of Aberdeen’s winter holiday lighting.

The monument was hit by an auto in 2000 and the impact broke the base. The Doughboy wasn’t damaged, but was temporarily removed until the base was repaired. It appears the rifle sling was gone at the time of restoration and not replaced, and more damage has occurred since (see color photo, below). 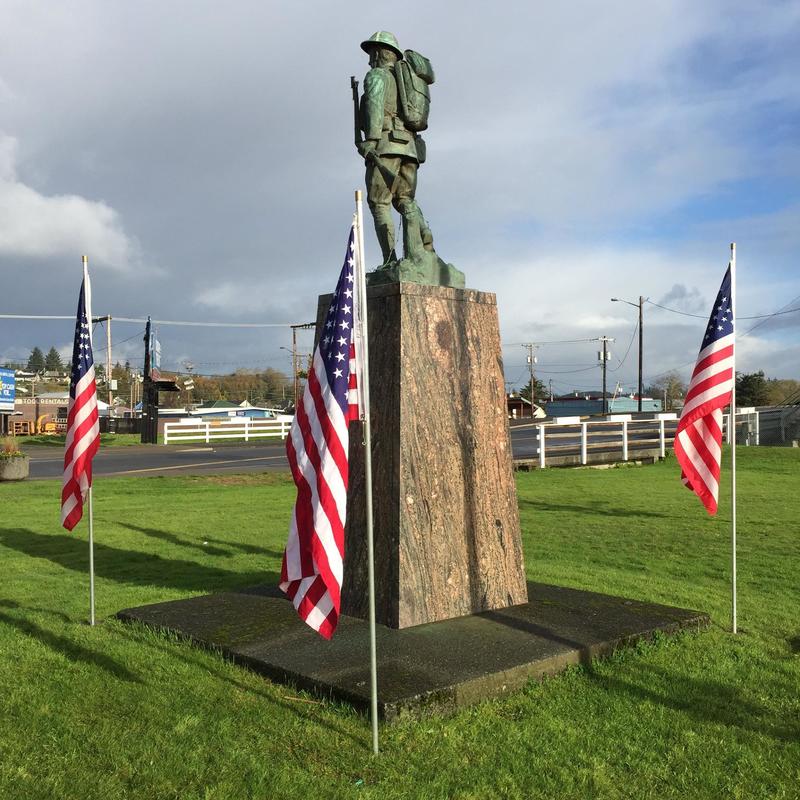 Photo: Jeff Cook, Facebook.
Update November, 2015: Above, the bayonet is now gone and the rifle has been bent up sharply from the middle.

Update October 15, 2018: After more vandalism, the statue is now off its pedestal and has bee sent to Valley Bronze in Joseph, Oregon, for repairs. Thanks to Eric Marshall of the Tour of Honor group for the unfortunate news.

Update April 30, 2019: The statue is scheduled to be returned to Zelasko Park at 9:30 a.m. May 1, and the public is invited to see the statue re-mounted on its base.