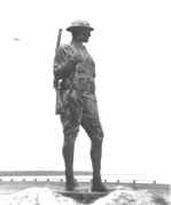 The Doughboy statue in the upper right color photo above differs from all other Doughboys placed by Viquesney that have been located except Lakemore, Ohio. It’s referred to in Palatka as the "Parade Rest" Doughboy, even though its stance is more like what the U. S. Army described as the "sling arms" position.

Curiously, Viquesney noted Palatka as the location of "2 Doughboys, 2 sailors" in a partial list of locations published around 1936, but though there are actually three Doughboys and one Sailor here. it's likely that Viquesney used stock items from Friedley-Voshardt Company for both this variant Doughboy and the Sailor below, as both appear in other locations not associated with Viquesney. They are probably the work of Friedley-Voshart's in-house master sculptor, Paul Mohrmann.

A stone maker to the right of the variant Doughboy reads:

1926 catalog illustration.
Palatka's "Navy" sculpture shown at right differs from installations of Viquesney's "Spirit of the American Navy", but was still long thought to be just a variant of that work.

However, the sculpture appears in a 1926 Friedley-Voshardt foundry catalog with an item number of S9008 and only the title "Sailor", leading us to believe this was simply a stock item from the company that Viquesney used to fulfill Palatka's large order of four statues (and another two at Clearwater, Florida, dedicated the same day). The fact that it also appears at St. Ignace, Michigan, as part of an impressive WWI memorial and a site not associated with Viquesney, lends credence to this notion.

The work is misidentified as "Spirit of the American Navy" in the Smithsonian Institution's Inventory of American Sculpture (IAS) and also contains what we consider to be a spurious news reference to sculptor Gutzon Borglum as the artist. It's doubtful that a sculptor as renowned as Borglum would ever agree to have any of his works be sold from a sheet metal company catalog. The "Sailor" is likely the work of Paul Mohrmann, Head of Sculpture at Friedley-Voshardt Company. 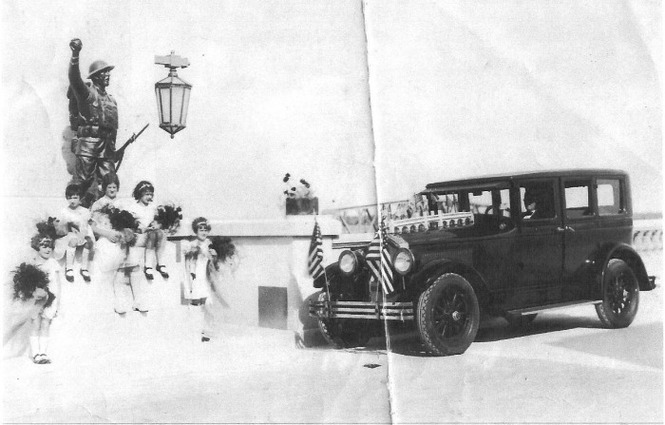 Photo provided by Mary Murphy, Putnam County Archivist.
Five young ladies at the Palatka end of the Memorial Bridge during the November 11, 1927 joint dedication of the bridge, the park, and the Plataka Doughboys and Sailor. The object on the hood of the auto is a model of the bridge.