Dedicated May 30, 1922.  The original left hand and rifle are missing (a mismatched replacement left hand with no rifle was added later) and the Doughboy could benefit from substantial cleaning, treatment and restoration.

The chapel in the background was built in 1909 so people would have a sheltered place to pay their last respects to the deceased in winter. The basement has several vaults where bodies were once stored during the winter while the ground was too frozen to dig graves.

Site visitor Rebekah Barton reports that her grandfather, Buster Dale Hammond, played the bugle at the dedication, according to a family story. Unfortunately, this cannot be confirmed, although Mr. Hammond is buried in Evergreen Cemetery, where the Doughboy stands. 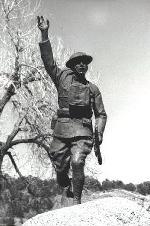 Photo: S.A.A.M.
For many years, a statue in nearby Manitou Springs, Colorado (left) was misidentified as a Viquesney Doughboy in the Smithsonian American Art Museum's Inventory of American Sculpture.  The record (47260007) has now been corrected.

The statue is "Over the Top to Victory" by John Paulding.