The plaque on the front contains a circular symbol of "The Five Civilized Tribes" and, below that, reads:
ERECTED IN COMMEMORATION
OF MEMBERS OF THE FIVE
CIVILIZED TRIBES, WHOSE
RECORD OF ENLISTMENT,
CONDUCT IN CAMP, AND
FORTITUDE AND VALOR ON
THE BATTLEFIELD, ADDED
LUSTRE TO THE TRIUMPHANT
VICTORY OF OUR COUNTRY IN
THE WORLD WAR.
(followed by seven names, including the then principal chiefs of the five tribes and the U. S. Bureau of Indian Affairs superintendent of the combined Five Civilized Tribes.)
Below the above, engraved in the bottom two large stone blocks are the words “VICTORY” and “PEACE".
Descending engravings on the blocks on both sides of the monument are the names of the Five Civilized Tribes:
CHICKASAW

CREEK
Descending on the blocks on the back are engravings naming historically famous leaders of the tribes:
COLBERT

OPOTHLE-YAHOLA
The Gifford Monument Company originally produced the monument base. Its successor is now the Muskogee Marble and Granite Company. 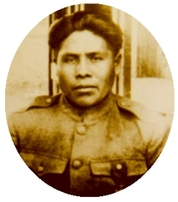 Pvt. Joseph Oklahombi
The Doughboy arrived in Muskogee sometime in 1924, but due to a delay in the selection of a base and a decision as to exactly where it would be placed, it wasn't dedicated until September 5, 1925. Allece Locke Garrard unveiled the statue. She read a poem written by her father, Ben Locke. Victor Locke, chief of the Choctaws, was her uncle, and Alice Brown Davis, chief of the Seminoles, was her grandmother. This was quite appropriate, because the ceremony also recognized Joseph Oklahombi, left, who was personally awarded the “Croix de Guerre” (France’s equivalent to the Congressional Medal of Honor) by Marshal Petain. Oklahombi was one of the World War I Choctaw “Code Talkers” (the famous World War II “Code Talkers” were Navajo). Oklahombi’s Croix de Guerre citation describes his heroic actions when he dashed, under a violent barrage, across 210 yards of no-man’s land through barbed wire entanglements, to storm a strongly held machine gun position, and captured about 50 German machine guns, several trench mortars, and 171 prisoners. He turned the machine guns on the enemy and held the position for four days, in spite of a constant barrage of large projectiles and gas shells. He also crossed no man’s land many times to get information concerning the enemy, and to assist his wounded comrades.

Other known Rylander copyright marks are on Doughboys at Bolivar and Sedalia, Missouri, and St. Bernard, Ohio.

The Five Civilized Tribes Museum and a Choctaw War Memorial honoring the Choctaws who gave their lives and the Choctaw Code Talkers of World War I (by name) are near the Doughboy.

The Doughboy would benefit from cleaning and restoration.
Update May 7, 2017: Plans are underway for a November 11, 2018 rededication of the Doughboy, commemorating the 100th aniversary of the end of WWI. The effort is headed by Vandelia Graham, JD.

Update October 21, 2017: The monument has been selected for a $2,000 restoration grant from the World War One Centennial Commission. The grant is part of the 100 Cities/100 Memorials program of the commission and the Pritzker Military Museum and Library.

Update January 31, 2018: The statue has been added to the National Register of Historic Places.

Update May 11, 2018: The Reverend John Robinson Chapter, NSDAR, received a DAR special projects grant totaling $9,551 to match funds raised for the restoration and rededication of the Muskogee Doughboy.

Update September 18, 2018: The Doughboy received a $25,000 refurbishment which included sandblasting and sealing. 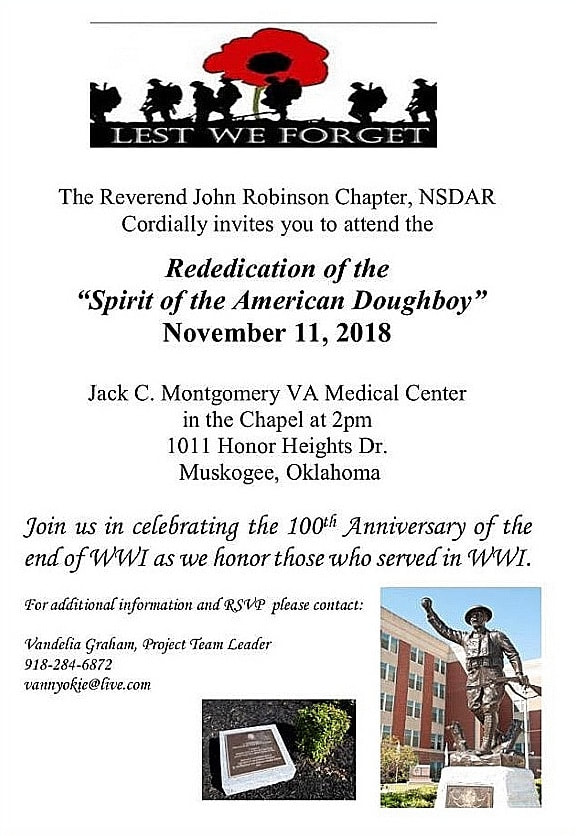