At the intersection of Park, Lake Road and Short Street, Lakemore, OH.

This little WWI memorial is the only one known; no other Viquesney Doughboy monument looks like it. It's called "Resting Doughboy" and stands in Lakemore, Ohio. Only 40 inches tall, it's mounted atop a tall cenotaph. Copyrighted in 1936, it was cast around 1937, dedicated in 1938 and rededicated fifty years later on May 30, 1988, after being repaired and reinstalled after a truck accident. It is being maintained by Army and Navy Union Garrison No. 273. The Lakemore sculpture is unique among the other Viquesney Doughboy monuments, both in size and pose. The statue is listed in the Smithsonian Institution's Inventory of American Sculpture (IAS), but with the incorrect title of "Spirit of the Doughboy" and a wrong copyright date of 1930.

The sculpture was originally cast in papier mache and was offered at $75. It was available in four finishes: White, silver, copper, and what Viquesney called "statuary bronze", a dark brown, almost black color. This version came with a 24-inch eagle bracket (see illustration below), the whole assembly meant to be attached to the wall of an indoor location such as a courthouse, club room, library, church, or school. The outdoor metal version, like Lakemore's, was presumably somewhat more expensive. The piece is similar in appearance to an earlier work by sculptor Avard Fairbanks, "Idaho Doughboy", which might have been the inspiration for Viquesney's version.

In July of 2006, visitor Scott Bieszczad of Perrysburg, Ohio, took photographs of the inscriptions on the base, which revealed the actual title of the Lakemore piece was "Resting Doughboy", with a copyright date of 1936. Scott also noticed a misspelling of the sculptor's name as "M. VIQUESMEY" on the base (missing the first initial "E", which was later added during a 2009 restoration). Unfortunately, the base still retains the misspelling of the surname. In 2012, contributor Harlan Ogle of Monticello, Kentucky, sent us a file from archive.org that contains an original brochure ad (below), listing the correct title and copyright date, but interestingly, the illustration shows an alternate title on the base, "Doughboy at Rest". 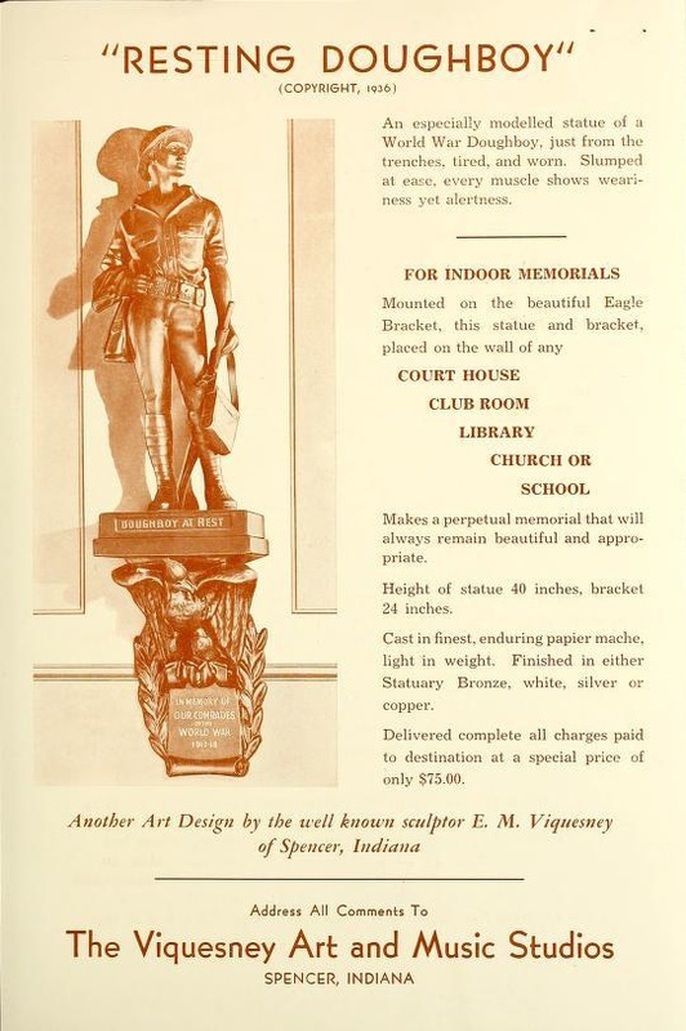 On the night of September 9 or early morning of September 10, 2008, the statue was broken off at the ankles and stolen by metal thieves who probably thought it was painted copper or bronze. The statue was recovered September 23 in Mogadore Reservoir in Portage County by fisherman Michael Wright. The statue suffered damage to the head, and the left hand and rifle were missing. John Stathopoulos, of Stathos Construction and Engineering, partially restored the original zinc statue, which is now kept inside the Army and Navy Union Garrison at 1391 Main Street. Stathopoulos made a bronze replica which stands at the original location in the triangle in the middle of town. It was rededicated Memorial Day, 2009. Unfortunately, the new base retains the original "Viquesmey" misspelling, although they did correctly add the "E" to the "E. M."
Update November 12, 2013: The Akron Beacon Journal reports that two local veterans, James Critchfield and past Post Commander James Richards decided to fully repair the original zinc statue. They spent hundreds of hours welding and painting to restore it. On 11/11/2013, it was brought back to where it originally stood for a dedication ceremony after the city's Veterans Day program. It was then returned to, and will remain inside the garrison building and probably be brought out from time to time in the future for special occasions.

Below: The original statue as it now resides inside the garrison building. The missing rifle, lost in the vandalism event described above, appears to have been replaced with a wooden copy. 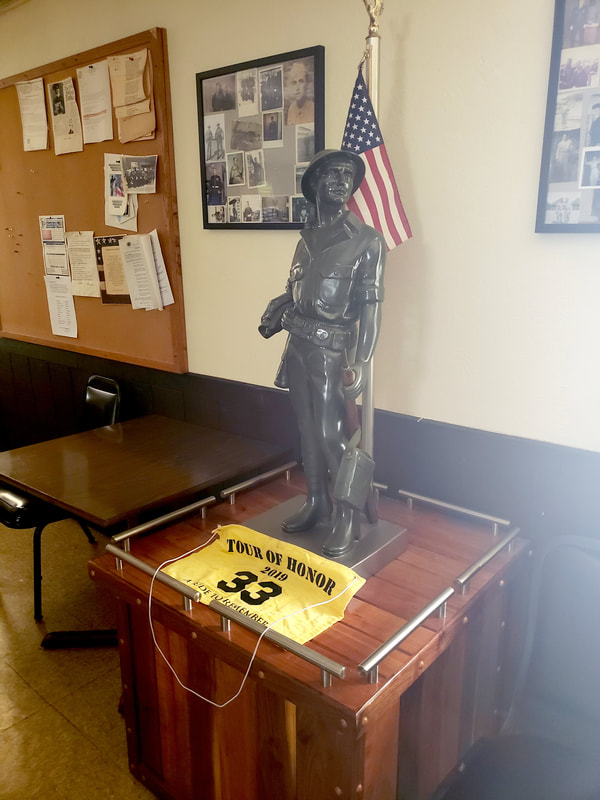