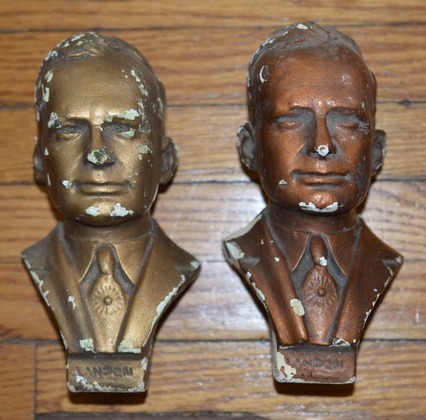 Alf Landon, Governor of Kansas from 1933 to 1937, ran for President in 1936 and was defeated by a landslide by Franklin D. Roosevelt.

These chalkware pieces may have been produced to coincide with the 1936 presidential election, but the local story is that they were produced to be sold as fundraisers for a larger bust. They aren't marked, but the style and theme are consistent with Viquesney's work, and the block lettering matches the style on other known Viquesney chalkware pieces.

The piece is about five inches tall, and was available in at least the two shades of "bronze" shown.