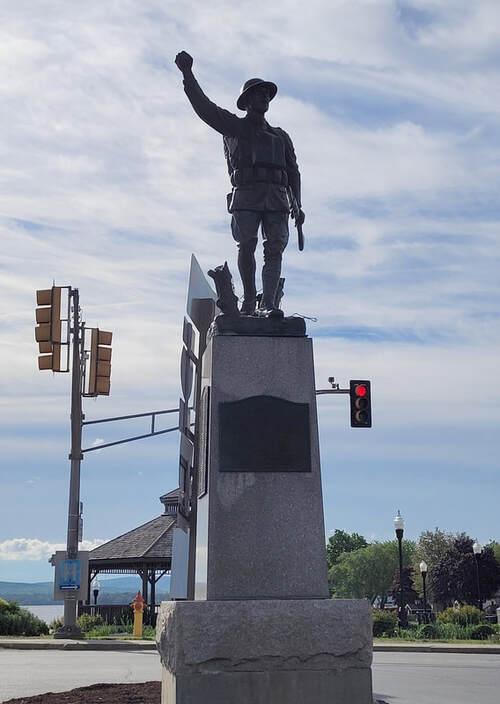 At intersection of Main, Broadway and High Streets – Routes 2 and 155.

TO THE DEAD A TRIBUTE
TO THE LIVING A MEMORY
TO POSTERITY A TOKEN OF LOYALTY
TO THE FLAG OF THEIR COUNTRY
ERECTED BY THE PEOPLE OF LINCOLN
A.  D.  1927

Plaques on the two sides contain 160 names, including 6 with stars. 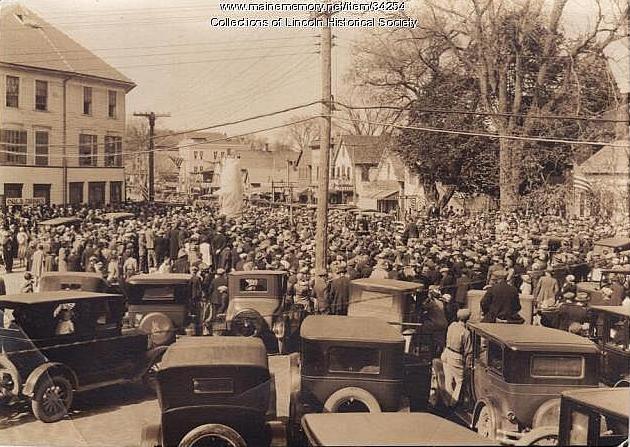 Collection of Lincoln Historical Society
Ground-breaking for the monument occurred on November 15, 1926 at a location originally known as the Hay Scales Lot. The photo above, dated 1926, may be in error, since the dedication ceremony occurred on May 29, 1927. It was attended by 200 schoolchildren and many citizens. The dedication speech was given by Governor Ralph Brewster, and the monument was presented to the town by the Honorable William T. Gardiner, with the unveiling done by local Lincoln area Civil War veterans. Music was provided by the 5th Infantry band, and there were more speeches, prayers, a parade, and a benediction bestowed by a Reverend Mullin.
All principal features except the rifle sling appear to be present. The stone on the ledge of the base has been damaged. The sculpture has become very discolored and could stand a lot of cleaning and other restoration and treatment. In 2017 there were some suggestions about restoring the Doughboy, but nothing came of it.

Since its initial dedication or installation, the Doughboy has been turned 90 degrees to the left from its original position. It used to face down Main Street and now faces down Broadway. Years ago, the youth of Lincoln used to "cruise the main drag" by circling the Doughboy, driving to the far end of Main Street to circle a Civil War monument, then drive back to circle the Doughboy, ad infinitum.

Each Spring, flowers are planted around the momument, and it is a popular photo attraction for tourists.

Thanks to Lee F. Rand of Lincoln, Maine, for information about the ground-breaking and dedication dates, and additional history of the monument.

Update May 13, 2021: The Lincoln Doughboy is undergoing restoration to be completed in time for Memorial Day.