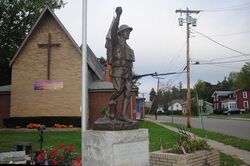 Near Castile United Church of Christ at Main and Washington Streets.

The engraving on the base reads:

The Doughboy was dedicated under the direction and sponsorship of the Wallace-Jeffers American Legion Post No. 753 on Monday, May 31, 1926. It, and its impressive base, which had to be transported from the nearby village of Pike, were purchased with public subscriptions, including pennies donated by grade school children.

The local Democrat and Chronicle described Monday, May 31st as one of the greatest days in Castile's history when the unveiling and dedication of the Doughboy Memorial took place in the presence of veterans, local residents and distinguished visitors from all parts of the county and elsewhere.

At 10 o'clock, headed by the Perry Drum Corps, a parade pf Wallace-Jeffers Post Legionaires from Warsaw, Perry and other towns proceeded to Grace cemetery where military honors were accorded deceased World Was comrades, Wallace and Jeffers, for whom the Post was named. The parade then marched to the high school to bereinforced by Castile, Perry and Warsaw Scout Troops and local school children. Under command of Post Commander, James B. Nice, assisted by Carl Randall as marshal, the procession moved down Clinton, past the Sanitarium to Beechwood, and returned via Main Street to the corner of Washington, where the ceremonies were conducted.

Post Commander Nice took the stand to explain the purpose of the event after the assembly call by Bugler B. C. Snyder. The opening prayer by Rev. Frank C. Putnam, paster of the Presbyterian Church, was followed by the two little daughers of Commander Nice, who at a given signal, pulled the cords covering the Doughboy Memorial, which was then dedicated by Rev. William Blankley, local Post Chaplain. School children, led by Janet Howard, sang "America the Beautiful" and Chaplain Blankley then introduced U. S. Senator James W. Wadsworth, Jr., who gave the main address. The proceedings concluded with the entire assemblage singing "America" and the rendering of the benediction by Rev. Blankley.

A luncheon was served by the Community Club at the Presbyterian Church for the visiting Senator, Congressman, Assemblyman, the County Board of Supervisors and the Legionaires. The main event of the afternoon was a baseball game at the local diamond. That evening, the Boy Scouts were served a dinner where they were greeted by the Tri-County Scout Executive, W. B. King of Batavia, and nearly all the other diginatares who were present for the day.

Each fall the Doughboy is removed from the base before Halloween and taken indoors at the Wallace-Jeffers American Legion Post, where it is cleaned, repainted, and minor repairs are made. It is then returned to its base in late May in time for Memorial Day. This function was performed or led for many years by Glenn Wallace, a member of the family of one of the war casualties for which the post is named. When he passed away in 2000, his son, Bill, volunteered to take responsibility for the role. The Doughboy is returned to the base each year on about the first of May to be in place for the observance of Memorial Day.

The left hand and/or rifle have been broken and repaired four or more times. These problems were probably caused by people swinging from the rifle. In 1927, an American Legion committee went to the high school to ask that people not climb on the Doughboy. Indeed, until 2012 the rifle barrel still had a pronounced downward bend, and the sling was missing (see photo, above left). 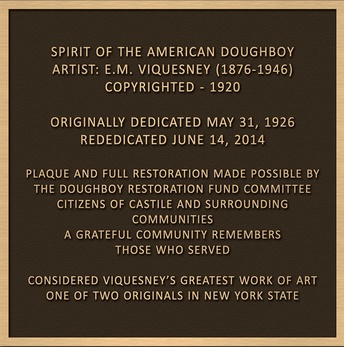 In 2013, the Doughboy was shipped to Forest Park, IL, for restoration by Conservation of Sculpture & Objects  Studio. Although the rifle was straightened, the missing sling was not replaced. A rededication took place on June 14, 2014, where Rev. Donald Vogel addressed the assembled crowd. The project was the brainchild of Castile resident Bev Edwards who was in charge of the rededication ceremonies. She worked with former Commander of American Legion Post 753 Bud Hoffmeister of Warsaw, New York, who handled the Flag Day parade. A new plaque was added at the rededication (left). 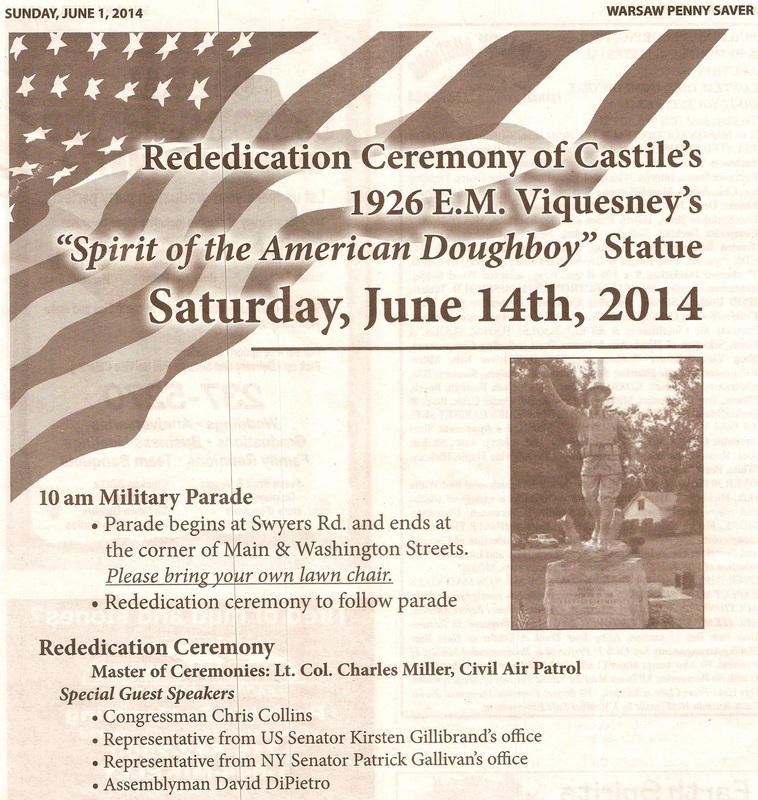 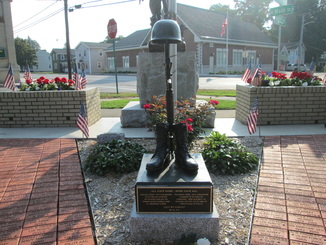 Mr. Bud Hoffmeister was instrumental in seeing the project through to completion, but it was, in his words, "only made possible with the help of contributions from private and local business".

A plaque was placed honoring those who contributed. 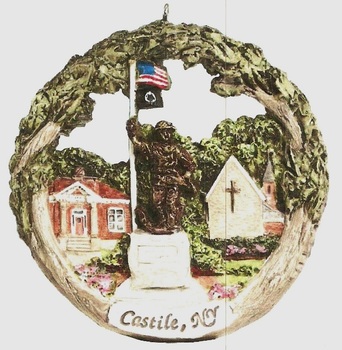