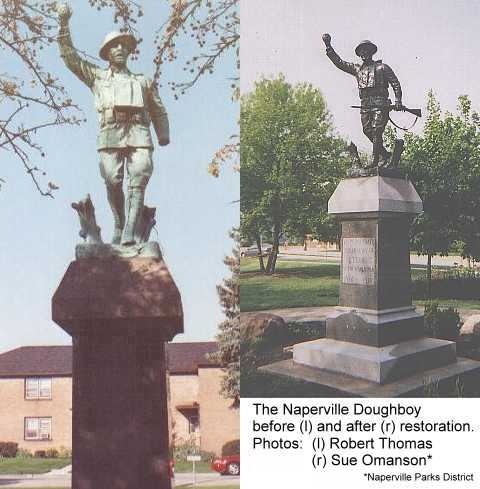 In Burlington Square, Center and North Street. The old postcard view below was probably published in the 1930s. A companion "Spirit of the American Navy" was added in 2013 (see last block). 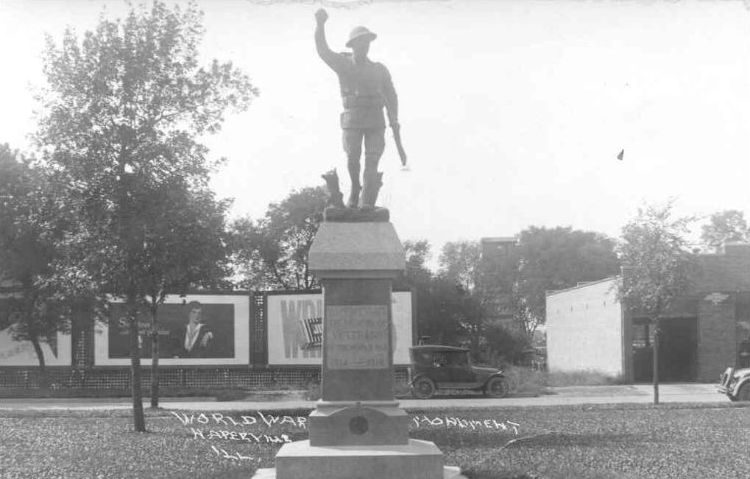 From the collection of Steve Hyett, Naperville, IL.

The inscription on a plaque on the front of the base reads:

The inscription on a plaque that is on a large nearby memorial rock reads:

TO HONOR THE
MEMORY OF THE
NAPERVILLE BOYS
WHO GAVE THEIR
LIVES IN THE WAR
OF 1914 – 1918
(followed by seven names)
The Doughboy was acquired through the efforts of Burlington American Legion Post No. 43 and originally dedicated May 31, 1926.  The photos at the top of the page show the Doughboy before and after its 2003 restoration.  Its hand, bayonet, rifle and part of the barbed wire were missing.  After restoration it was rededicated in a re-landscaped circular plaza area in the square. The restoration work was performed by Giorgio Gikas of Venus Bronze Works, Detroit, Michigan.
When the Doughboy was rededicated in a very impressive ceremony May 25, 2003, a new plaque was also placed, which reads:

The Spirit of the American Doughboy

The American Legion Post 43 erected this sculpture in honor of those from Naperville who served in World War I. Artist E. M. Viquesney created the mold for the Doughboy and supervised the factory production in Spencer, Indiana. Calling the Doughboy his "greatest and most sincere effort", Viquesney aimed to capture every detail of the American Soldier. His intent was to create a democratic war memorial honoring the common soldier in each hometown throughout the United States. Today, the Doughboy remains one of the most viewed outdoor sculptures in America. It stands proudly in over 135 locations, including Burlington Square Park, for many years, the gateway to Naperville. 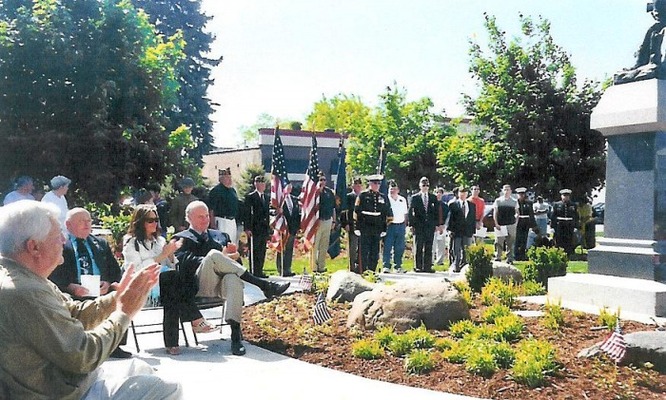 Photo: Sue Omanson, Naperville Parks District.
The May 25, 2003 rededication of the refurbished Doughboy in Naperville, Illinois. Former U. S. Senator Fred Thompson, one of the speakers for the occasion, is seated at the end of the row facing the camera. Naperville Mayor A. George Pradel is also seated facing the camera, wearing a black tie with a white image of the Doughboy on it. The individual on the left, nearest the camera, is Bud Boecker, a member of the committee that spearheaded the refurbishment and rededication. This photo was provided by Sue Omanson of the Naperville Park District. Her daughter, Sara, sang the national anthem at the ceremony. 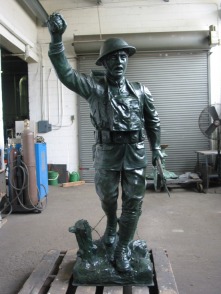 Photo: Steve Hyett, Naperville
Doughboy Restoration Committee.
At the time of the first annual maintenance of the newly refurbished Doughboy in the spring of 2004, the Doughboy was rewaxed and two new plaques were added to the Doughboy plaza area.  One lists Naperville veterans of WWI and the other lists the donors, committee members, and citizens of Naperville who contributed to the refurbishment.

The photo at left shows the Doughboy in the repair shop at Venus Bronze Works. 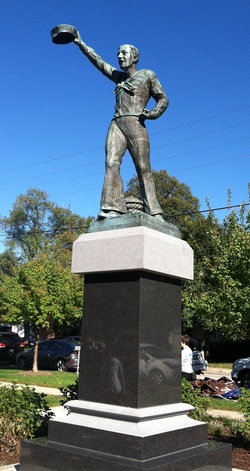 Photo: Steve Hyett, Naperville. Illinois.
On November 18, 2012, I received a Google Alert informing me that a copy of E, M. Viquesney's "Spirit of the American Navy", the companion piece to his famous "Spirit of the American Doughboy", had been found in a Pentwater, Michigan marine supply store. For 35 years it had been there, "hiding in plain sight". Previously, only six examples of this piece were known to exist; now suddenly there were seven.

At first skeptical of the report, I had my site colleague Earl Goldsmith check it out. After calling up the store, Earl confirmed that the statue was genuine; it had originally stood somewhere in the "Chicago area", according to its now former owners, "Chick" and Donna Kolinger, who run the Brass Anchor Ships Store in Pentwater. They said they found it in a junkyard when their store was still in Chicago. But a check with the people at the City of Chicago website revealed no missing World War I statues, so the piece might have come from any one of the dozens of surrounding suburbs and communities.

There were many parties interested in acquiring the wayward statue. Representatives from Monticello, Kentucky, Vernon, Texas and Spencer, Indiana (Viquesney's hometown) also had contacted the Brass Anchor, seeking information or making offers. Spencer just missed getting the statue in May, 2013; Naperville had already put down a deposit on the piece the month before.

On July 12, 2013, the Navy statue arrived in Naperville and was temporarily displayed in the canteen at the Judd Kendall VFW Post. On August 12, 2013: The statue was displayed in the Naperville Municipal Center building pending its final move to Century Walk in Burlington Park. On September 26, 2013: The funding for this project was completed through Citizinvestor.com.

The "new" statue was dedicated October 13, 2013, the 238th birthday of the U. S. Navy. It was placed in Naperville's Century Walk, an "open-air art museum", at the opposite end of Burlington Park, where the city's "Spirit of the American Doughboy" stands. Folliwing unofficial tradition, the two statues stand within sight of each other. Naperville resident Brand Bobosky was heavily involved in the statue's acquisition.

Although it may never be know exactly where the statue originally stood, it is fitting that it's finally coming home to the "Chicago area" after so many years "missing in action".
Five other metal "Spirit of the American Navy" sculptures accompany Viquesney Doughboys at Kingman, Arizona; Clearwater, Florida; Fort Wayne, Indiana; Granite and Hobart, Oklahoma; and a stone version at Crowell, Texas. A similar tribute to the Navy, titled "Sailor", occurs at Palatka, Florida, but although placed by Viquesney, it was not sculpted by him.