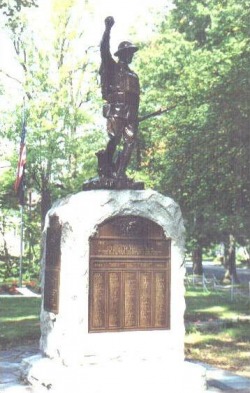 In Roselle Park in front of Veterans Memorial Library at Chestnut Street and Clay Avenue.

The Doughboy was first dedicated September 3, 1923. The World War II plaque was added in 1948 and the Korea/Vietnam plaque was dedicated April 30, 1988.

The Doughboy, which is sometimes affectionately referred to in Roselle Park as “Iron Mike,” has suffered vandalism through the years, as have nearly all Doughboys. The bayonet was taken in one incident and the left hand and rifle were removed in another.  Repairs were made, but the 75 years of exposure to the elements caused other deterioration and discoloring.

A major restoration project in 1999 involved the borough officials, schools, historical society, a landscaper, Easton Memorial Company from Pennsylvania, and three local veteran organizations. A bayonet was added to replace a temporary bayonet that had been used in an earlier repair, and the Doughboy and plaques were cleaned, polished and repaired where possible. The rededication ceremony was held May 31, 1999, and while the rifle sling is still missing, “Iron Mike” is now in outstanding condition.

In his 1991 Doughboy report, Viquesney researcher T. Perry Wesley mistakenly listed Roselle Park as "Rochelle Park", and although there is a nearby town named Rochelle Park in New Jersey, there's no Doughboy statue there.

Update November 11, 2015: Six new monuments that honor the Air Force, Army, Coast Guard, Marines, Navy, and Merchant Marines were unveiled in front of the library, near the Doughboy. The work was done by Art In Granite Memorials, LLC, of Old Bridge, New Jersey.