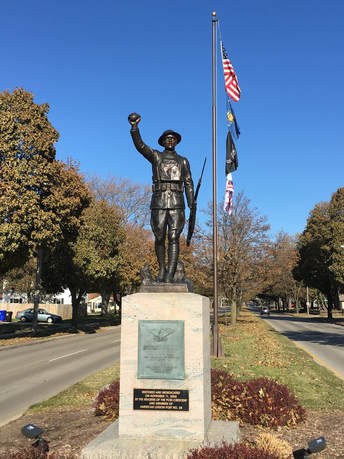 On Memorial Drive, near southern end of boulevard area that extends south from the high-level Fox River Bridge. (Memorial Drive was Cherry Street until it was renamed in 1929 to honor World War veterans. It is now a memorial to all veterans.)

DEDICATED TO THE MEMORY OF
OUR COMRADES WHO ENTERED THE
SERVICE OF THEIR COUNTRY
FROM OUTAGAMIE COUNTY
AND WHO GAVE THEIR LIVES IN
THE WORLD WAR
---------
PRESENTED BY
ONEY JOHNSON POST No. 36
AMERICAN LEGION
NOVEMBER 11, 1934
A new plaque below the old one reads:

RESTORED AND REDEDICATED
ON NOVEMBER 11, 2006
BY READERS OF THE POST-CRESCENT
AND MEMBERS OF
AMERICAN LEGION POST NO. 38
Another new plaque, added for the November 2017 new cast bronze replacement, reads:

"SPIRIT OF THE AMERICAN DOUGHBOY" 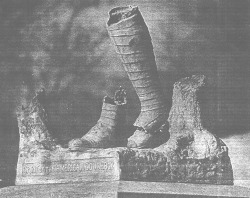 Photo: Appleton Post-Crescent.
The Doughboy was nearly destroyed in November 1986 when it was hit by an automobile whose driver had fallen asleep. It was broken from the pedestal, leaving the lower parts of the legs on the pedestal. Its upper arm was torn off. Appleton Lamplighter employees Bob Keiba, Steve Mondloch and Kevin Weisshahn, used mine detectors to sweep the area and locate all the loose pieces they could. Then they made replacements for pieces that couldn’t be found and fashioned a new rifle and bayonet. Chemically treated cement that wouldn’t expand or contract was placed in the legs to help provide stability (it didn't). The pedestal was repaired by Appleton Marble and Granite. 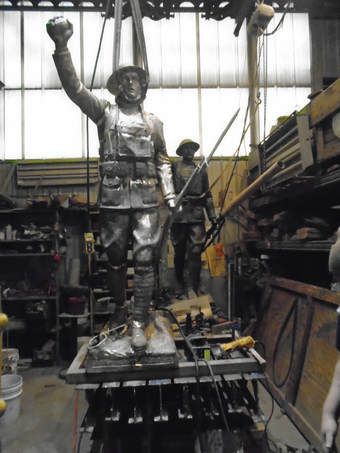 Unfortunately, as mentioned above, the Doughboy's legs were filled with cement to help stabilize it, but apparently alternate seasonal freezing and thawing of moisture between this filler and the metal skin eventually caused the leg seams to split. The Doughboy was once again taken down and restored, this time by Jensen Conservation Services of Omaha, Nebraska. It was rededicated on November 11, 2006. However, a 2014 evaluation by Sculpture Valley revealed that this restoration was not a full metal repair of the zinc alloy statue as was expected, but an epoxy fill and patina fix of the seams, which, intentionally or not, masked the continuing state of the zinc alloy decay.

​Update Fall, 2014: From a Sculpture Valley report by Alexander Schultz: Jenson Restoration returned to perform another temporary restoration, at which time they strongly recommended moving the sculpture to an indoor location.

Update Spring, 2015: Sculpture Valley examined the 2014 restoration and discovered fresh deterioration and flaking already present. Plans are underway to locate a mold of the statue to create a bronze replica.

Update May 18, 2017: Innocast Execuline has completed a quotation for the city of Appleton to replace the Doughboy with a bronze cast replica. The company has created replicas for New Ulm, MN, and Jamestown, KY.

Update July 15, 2017: The statue was taken down from its pedestal, to be replaced with a bronze replica in a few months. There are plans to display the original zinc statue inside Appleton's History Museum at the Castle, but the museum does not yet have sufficient funds to display the piece. It is currently in covered storage at the City Facilities building in Memorial Park. The new bronze replica will be cast by Max-Cast foundry of Kalona, Iowa, and will be rededicated on November 11, 2017, along with a new WWI Centennial plaque.

The old black-and-white photos and essentially all items of information about the Appleton Doughboy (except the updates from Alexander Schultz of Sculpture Valley) were provided by Don Evans, Researcher at Appleton’s Outagamie County Historical Society.