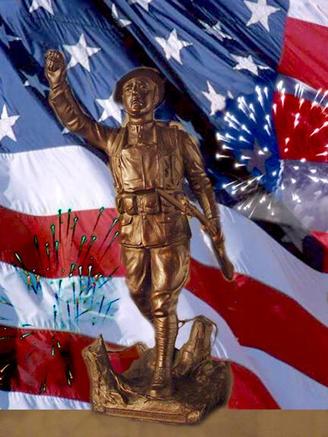 If you don't want to read all the dreary details below, then in a nutshell:
The 12" (actually 11.5") Viquesney miniature Doughboy isn't "rare" as touted by many eBay and other sellers. Since 2002 I have tracked hundreds of them on eBay alone, nearly all in varying degrees of disrepair. And since thousands of these statuettes were churned out during the 25 years following WWI, there's really no way to tell how many are still around that aren't for sale. The "rare" ones are those that are complete with no missing parts, meaning most commonly, a totally undamaged rifle, with no missing bayonet and/or rifle sling. Unfortunately, the rifle is the site of most damage that occurs. The record high price for the statuette version was $845 on eBay, March 5, 2018, which not only was in nearly perfect condition, but also included the paper instruction sheet for attaching the separately-cast left hand and rifle to the left arm. On May 12, 2022, a table lamp version in its original shipping box sold for $1,150, plus $142.15 for expedited shipping.

It should be pointed out that these are uncommon sales prices. A friend of my late research colleague Earl Goldsmith brought one to the PBS Antiques Roadshow program, where he was told the show's appraisers see them quite often. Their usual estimate is "a couple  of hundred dollars".

More detailed information:
Viquesney's miniature "Spirit of the American Doughboy", standing just under 12 inches tall on its base, was one of his most successful and popular creations; thousands were sold during the twenty-five years from 1921 to 1946, and it is still the most common of his surviving creations. Thus, today they are not nearly as rare as some of his other miniature pieces. On average, since 2002, when I first began tracking them, one or two Viquesney miniature Doughboys have shown up for sale on eBay each month.

The most common question I get is, "Is there anybody who can repair or replace parts on my Doughboy?" See our repair and restoration (miniatures) page. Most surviving Viquesney miniature Doughboys have damage, ranging from minor scratches or paint chips, all the way to broken or missing parts, usually the bayonet, and next after that, the whole left hand and rifle. Sometimes the entire base is gone, making the piece useless as a statuette and worth virtually nothing except as a source of replacement parts for repairs on other pieces.

The next most common question I get is, "How much is it worth?"  Don't get your hopes up; it depends on what condition your Doughboy statuette or lamp is in. Most have suffered over the years, due to their being cast of a brittle lead alloy.  A Viquesney Doughboy statuette or lamp with no scratches or chips and including all its original parts (rifle with sling and bayonet, barbed wire on the base, and felt pad and sticker label on the bottom, and in the case of the lamp, all the foregoing plus an original shade, power cord and plug) can sell for several hundred dollars, but they're not common.

I began tracking the miniature Viquesney Doughboy on eBay and other auction sites when I published the first version of this website in March of 2002.  Several hundred have appeared since then, most missing the bayonet or the whole left hand and rifle, but despite this damage, some eBay sellers still ask outrageous, sometimes four-figure prices for them, even for some in broken or derelict condition.

"Is the Viquesney miniature Doughboy a rare piece?" It depends on whether it's complete or not. The vast majority are missing the bayonet or the whole left hand and rifle, so the rare ones are those that have survived intact. Even so, most eBay sellers keep advertising the piece in any condition as "rare", and it really isn't. Viquesney had factories in the South, East, and Midwest churning out these pieces by the thousands during their heyday in the 1920s and '30s, and there are still hundreds of them floating around (and those are just the ones I've tracked for sale online; there is no way of knowing how many more might still exist off the market, with no thought of being sold).

"How old is my miniature Doughboy statuette (or lamp)?"  Depending on which factory it came from, there may or may not be a copyright date of 1920 on the back of the base, but even if there is, that's just the year the design was copyrighted; actual production began the next year. So if it says "Americus, Georgia" on the back of the base, it was made from 1921 - 1925; if it says "Spencer, Indiana", it's from 1926 or later, until the time production ceased, probably around the time of Viquesney's death in 1946.  However, the more recent Spencer models are far more rare than the earlier Americus ones, likely because as the years progressed, fading memories of WWI, the Great Depression, and the onset of WWII (with its metal rationing) all acted to slow or limit later sales out of Spencer. But this rarity doesn't seem to make these later Spencer models any more valuable than the older, more common Americus ones. To what collectors there are, these pieces are apparently all considered to be the same (and except for the Americus or Spencer logo on the back, they are).

"Are there any other versions of Viquesney's miniature Doughboy? Yes. Besides the 12-inch metal statuette, there were also lamp, candlestick and incense burner versions using the same size figurine. The same basic mold (with the rifle in a different position) was used for plaster versions of the statuette and lamp for those who couldn't afford the metal ones. Perhaps due to metal rationing during WWII, there was a 6-inch metal version available; it survived up to the time of Viquesney's death in 1946. It, too, was also available in plaster. There was also a 7-inch "flat" bas-relief stamped metal version that was suitable for mounting on a plaque. Although these other versions are much rarer than the "standard" 12-inch metal statuette, prices for them are generally not higher; in fact they're usually lower. What collectors seem to want is the best-known metal 12-inch statuette version, and there are a lot of those available, which keeps prices down.

"Is the lamp version more valuable than the statuette?"  Maybe, if it's in perfect shape and working condition, and has its original shade, which is nearly impossible to find (see next question). Partly because the lamp originally was more expensive than the statuette ($10.85, post-paid, as opposed to $5.00 or $6.00 for the statuette, fewer people bought them, considering that at that time (the 1920s and '30s) $10.00 was a week's wage for some people. Also, since the piece was originally designed to be a just a statuette, the added weight of the light bulb, socket assembly, and shade sitting atop the raised right arm made the lamp version more unstable and highly vulnerable to tipping over and breaking. Thus most of the existing lamps today are in sorry shape and generally sell for less than the plain statuette version. Although Viquesney tried hard to push the lamp in slick catalog ads directed toward women (my grandmother bought the one I now own), most buyers at the time were ex-servicemen who only wanted the statuette version, which could be displayed anywhere in the house or office, not just where a lamp was needed. That bias still exists today, with many buyers considering the lamp and other versions like the candlestick and incense burner to be just converted or altered statuettes (and actually, that's all they really are). Just because it's rare, doesn't necessarily mean it's valuable.

"Are there any surviving original lamp shades for the Doughboy lamp?" I've seen only one lamp with a complete original shade show up on eBay.  They're extraordinarily rare.  The most common shade, with a poppy flower motif, was made of "parchment" paper which usually fell apart after a few years.  An alternate shade made of "silk" was offered, but I've never seen one except in old ads. See the Sales Brochure on our Viquesney Archive website to view pages showing both styles of shade as originally offered.

"My lamp has the wiring on the outside, running up to the socket." The factory-issue Doughboy lamp always had the wiring running into a hole in the back of the base, up inside one leg, through the torso, and up inside the right arm, to the socket. If your lamp has external wiring, or any extra holes for the wiring, it may mean you have a statuette that was converted into a lamp by someone else, or the wiring on an original lamp was later replaced, bypassing the internal wiring.

"My Doughboy statuette (or lamp) doesn't have a bayonet on the rifle." The bayonet (and often the whole left hand and rifle assembly) is commonly missing.  This is because the left hand and rifle were packed separately and had to be attached by the customer, and over the years, this piece often fell out and got lost.  Even if the rifle managed to stay attached, the bayonet almost always got broken off.  So common is the missing bayonet that one seller on eBay, trying to sell a statuette in that condition, told prospective bidders that "post-1930 models" were manufactured without it.  This is untrue; I have original ads from the mid- and late 1930s showing the statuette illustrated with the rifle complete with bayonet just as it was always sold. It wouldn't be a true miniature copy of Viquesney's large monument without it.

"Is my miniature Viquesney Doughboy made of bronze?" No. While I've seen these pieces offered on eBay as "bronze", none of Viquesney's original statuettes were made of it.  Anyone offering an original Viquesney miniature Doughboy on eBay or elsewhere as "bronze" has, at best, probably been fooled by the convincing-looking paint or plating finish, or, at worst, is just plain outright lying  The statuette even originally came shipped with an insert informing the buyer that the piece was made of soft "white metal which bruises easily". The most expensive original statuettes were offered at $6.00 with an "oxidized bronze" plating, but that was as close to "bronze" as they came; the metal miniatures were always made of lead alloy.  And since most of these pieces often have some paint chipping, the underlying gray pot metal can be seen, which looks nothing like bronze.

Still need more info?
If you have any further questions not answered on this page, please contact me at the e-mail address below.