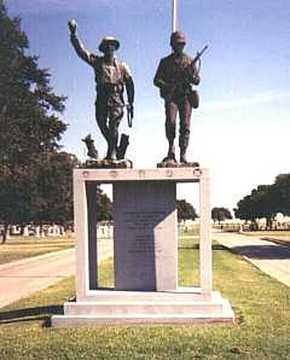 In veterans area in southwest quadrant of Mount Olivet Cemetery, 2301 North Sylvania Avenue.
The Smithsonian IAS file contains duplicate records for Fort Worth, one of which (47260108) describes only the Doughboy, and the other (TX000141) which much more fully describes both the Doughboy and its companion statue of a WWII. G.I. by Giordano Grassi.  The first record could be deleted by the Smithsonian.

An engraving on the tall stone between the two figures reads:

A plaque inscription on the back side of the stone reads:

THIS STATUE IS GRATEFULLY AND LOVINGLY
DEDICATED TO THE MEMORY OF
THE MEN OF TARRANT COUNTY
WHO GAVE THEIR LIVES IN THE WORLD WAR
1914 ------------ 1918
THE GIFT OF MOUNT OLIVET CEMETERY CO.
TO THE BOTHWELL KANE POST NO 21
AMERICAN LEGION AND ITS AUXILIARY

An engraving below the plaque reads:

“THE SPIRIT OF THE AMERICAN DOUGHBOY”
STATUE WAS ERECTED NOVEMBER 17, 1929
THIS PLAQUE
WAS ON THE ORIGINAL PEDESTAL

The sculpture on the right represents a World War II serviceman titled “American G. I.” It was dedicated to join the Doughboy in 1980 as a part of the annual Memorial Day observances that have been held by veteran and patriotic groups at the site since 1929. It was created by sculptor Giordano Grassi and was cast in Carrara, Italy.

Although the statue was erected on November 17, it wasn't unveiled and dedicated until December, 1929, according to the fortworthtexas.gov website. At the original dedication, words were spoken by Texas National Guard commander and World War hero Gen. John A. Hulen.

The Ft. Worth Viquesney Doughboy is one of three definitely known to have been fabricated by the Friedley-Voshardt Company of Chicago, IL. It's since been proven from old Friedley-Voshardt ads that all copies of the sheet bronze version of this statue were manufactured by this company. The company's invoice referencing Viquesney's American Doughboy Studio for the Mt. Olivet Doughboy appears below. 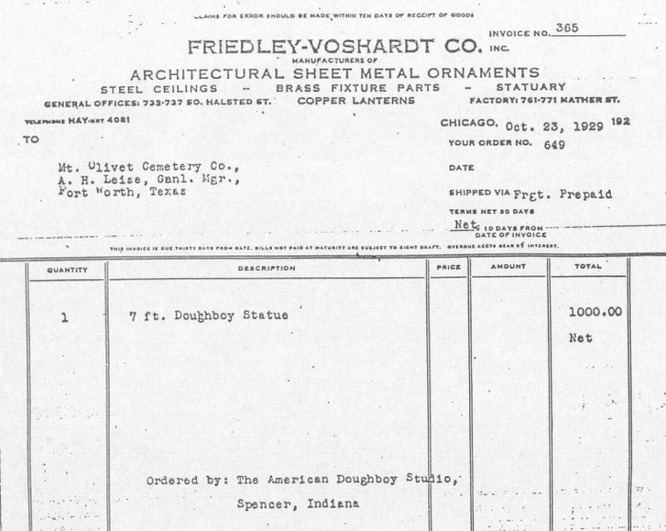