IN MEMORY
OF THE COMRADES WHO
GAVE THEIR LIVES IN THE
SERVICE OF OUR COUNTRY
DURING
THE WORLD WAR.
PRESENTED TO
BIRMINGHAM POST NO. 1
OF
THE AMERICAN LEGION
BY
THE GREEK-AMERICAN
CITIZENS.
BIRMINGHAM, ALABAMA.
ARMISTICE DAY, 1923. 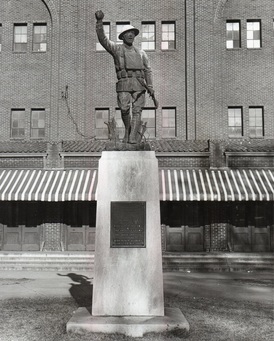 Birmingham's ''Johnny Doughboy'', Jan. 7, 1957.
Gift of the Greek-American citizens to Birmingham Post No. 1 of the American Legion. Administered by the City of Birmingham Department of Parks and Recreation, 400 Graymont Avenue, Birmingham, Alabama 35204. Dedicated November 11, 1923, at the front entrance to Municipal Auditorium, now known as Boutwell Auditorium. The statue was moved to the entrance of Linn Park, probably sometime in 1957, after a renovation to the front of the auditorium that year.

​A press photo, left, dated January 7, 1957, shows the statue still standing at its original location in front of the old brick auditorium facade, probably just before the move to Linn Park. The rifle sling is already missing. The back of the photo refers to the statue as "Johnny Doughboy". 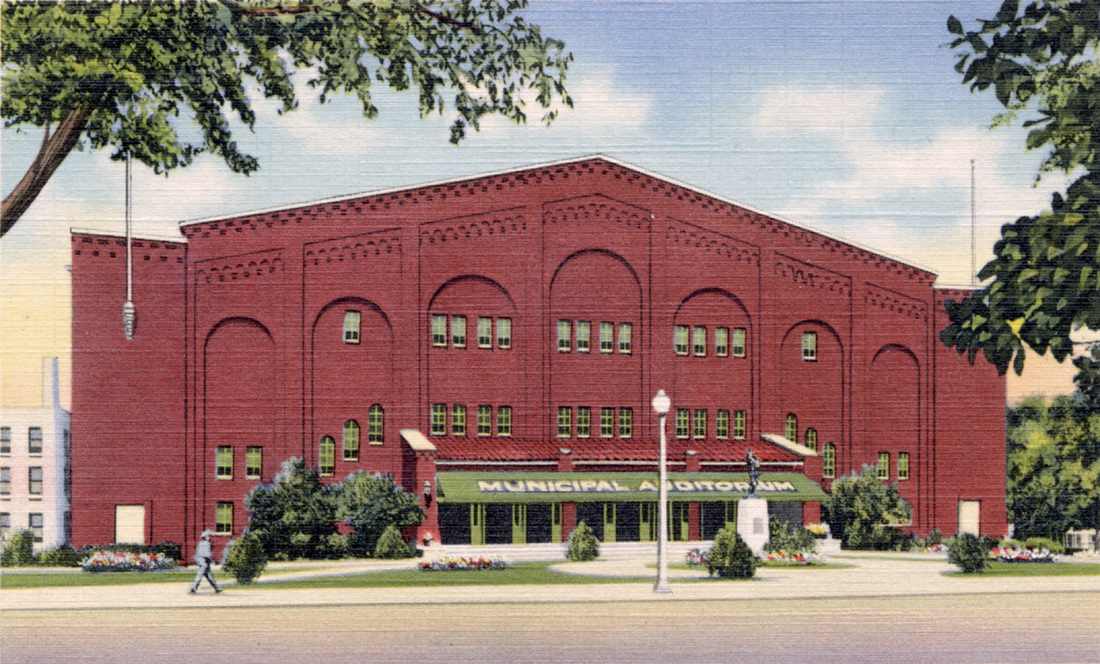 The Doughboy at its original location in front of Municipal Auditorium, ca. 1937.

Update December 18, 2010: Sometime before December 17, 2010, the plaque bearing the words above was stolen; there are no leads. The color photo at the top of the page, taken in July of 2012, shows the plaque missing. The rifle sling is gone (missing since at least 1957) and the statue could use a cleaning.

Update June 24, 2013: The city of Birmingham is set to enter a contract with McDowell Studios of Birmingham to assess the condition of artwork in Linn and other parks.

Update May 31, 2020: According to news reports, the Birmingham Doughboy was vandalized with graffiti by protesters and has been taken down by the city.