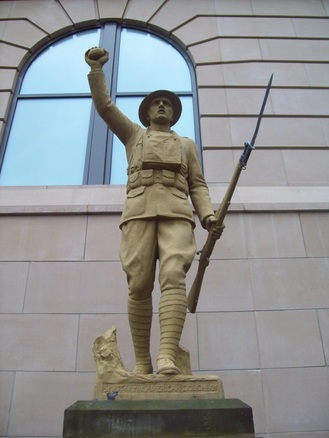 The statue was originally placed in 1934 at the corner of Bowery and High streets, the site of the old Akron Armory. When construction began at that site in 1982 for the Ocasek Building, the statue was moved to the Summit County Courthouse. It was moved again to make way for the courthouse addition to be built. After a 2013 refurbishment, the staue was reinstalled in Charles Goodyear Park, 209 S. High St., on the courthouse grounds.

The inscription on the plaque on the front of the base reads:

DEDICATED TO THE MEMORY OF
THE MEN & WOMEN WHO SERVED
THEIR COUNTRY
FROM SUMMIT COUNTY
DURING THE WORLD WAR
-------
PRESENTED BY
THE GOLD STAR MOTHERS OF
SUMMIT COUNTY
NOVEMBER 11, 1934

This Doughboy version was copyrighted in 1934, and the most noticeable difference from the 1920 version – the shorter tree stumps – is distinguishable in this photo. Another significant difference is that the 1920 version has an open mouth with teeth showing, but the teeth aren't visible on the earliest 1934 installations (a small design change to the mouth in 1935 revealed slightly visible teeth). Still another difference is that the title "SPIRIT OF THE AMERICAN DOUGHBOY" is prominently embossed on the front of the base, whereas on the 1920 version, the title was usually unobtrusively displayed on a small plate on the base near the proper right foot.

Akron's Doughboy was one of the first three of the new 1934 cast zinc version that were all dedicated November 11 of that year.  The two others were Anderson, South Carolina and Appleton, Wisconsin.  All three are of the earliest zinc version in which the teeth don't show.

While the rifle sling and barbed wire is missing, the photograph appears to depict a painted sculpture in very good condition. A 1993 report indicated that it was in need of treatment at that time.  Based on photographs on file, treatment must have taken place since then.

This Doughboy was orignally planned to be placed at a rather remote location off George Washington Boulevard, near what was then the new airport. At a May 29, 1931 ceremony, a memorial plaque was unveiled, affixed to a large boulder. The plan was to have the Doughboy statue, which hadn't yet been purchased, stand atop the boulder. But in July 1934 an act of vandalism on the plaque forced the site to be abandoned, and when the statue finally did arrive, it was placed at the armory location.
Update July 17, 2013: A refurbishment project was completed by Paul Thomarios, of Thomarios Construction, which cleaned, bronze plated, and sealed the statue. It now has a darker finish than shown in the color photo at top.

Update November 11, 2018: Below: A set of memorial plaques has been added next to the Doughboy. The plaques contain the names of 1,534 Summit County residents who died in World War II. The plaques were originally installed in Memorial Hall at the University of Akron in 1954 and remained there until 2010, when the building was torn down and they were stored. 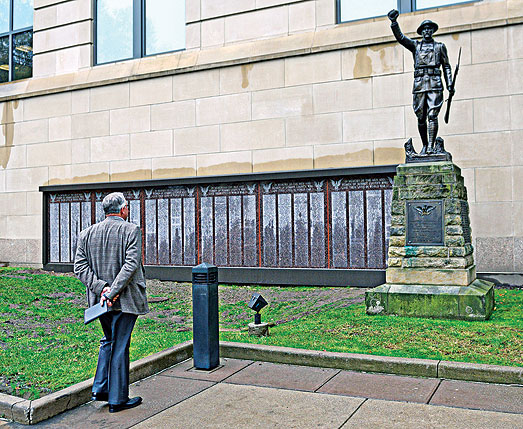