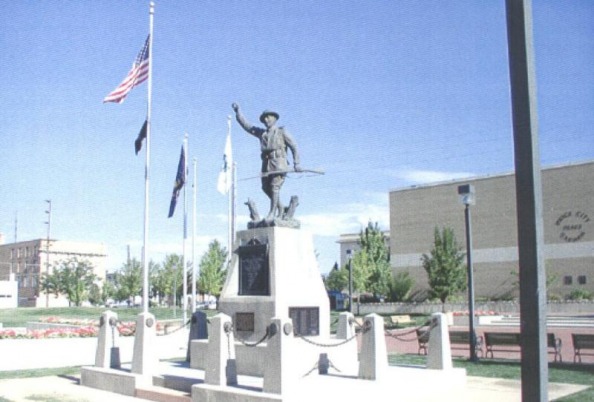 The Smithsonian IAS record doesn't name the sculpture by its full title, "The Spirit of the American Doughboy".

﻿The plaque inscription on the front of the base reads:

HONOR       ROLL
IN MEMORY OF THOSE
WHO MADE THE SUPREME SACRIFICE
WORLD WAR I
(followed by five names)
WORLD WAR II
(followed by eight names)
ERECTED MAY 30, 1948
The statue itself was not erected in 1948. That date reflects the addition of WWII names on the plaque while the statue was still at Hiawatha. The statue and plaque were moved and reinstalled at Price in 1989 and rededicated there the next year.

The statue was first dedicated at Hiawatha, Utah, on May 30, 1922, on a site between the community amusement hall and the U.S. Fuel office building. It was moved to Price in 1989, and rededicated there on November 10, 1990 (Veterans Day, the 11th, fell on a Sunday that year).
The lower plaque on the base’s front concerns the Doughboy’s original dedication in Hiawatha, Utah, and reads:
This statue was erected in Hiawatha, Utah
by the Henry Holdsworth Post # 15 of the
American Legion May 1922, to honor five
men from Hiawatha who died in World
War I. In June 1948 eight names were
added for those killed in World War II.
In 1989 through the efforts and sole
expense of American Legion Price Post #3,
this statue was graciously donated to Price
City by the mayor and town; council of
Hiawatha, Utah.
Henry Holdsworth is one of the five original names listed on the May 30, 1948 plaque.

Entered service from Hiawatha, Utah.
Plaques on the two sides of the base contain honor rolls naming those from Carbon County (which includes both Price and the former site at the town of Hiawatha) who served in World War I, World War II, Korea and Vietnam. They were made by James L. Young, head of the College of Eastern Utah Art Department, and were dedicated on St. Patrick's Day, 1991. 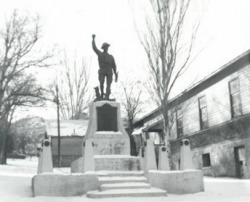 Photo from The Doughboy Center
Website, donated by Lori Curtis.
Left:  A photo of the monument when it stood in Hiawatha. The base and the surrounding posts in Price are the ones that were at Hiawatha.

A coal company, which owned all of the real property in Hiawatha, sold it to another company in 1989 and the new owners began demolishing structures of the town to proceed with mining operations. The Hiawatha town council decided that the Doughboy should be moved and offered it to the Mayor of Price, who had grown up in Hiawatha. The Price American Legion post underwrote the move, and it was rededicated in Price November 10, 1990. Hiawatha is now a ghost town.

The Peace Garden area, conceived in 1994 by Legionnaire Jack Kobe, was designed and built specifically with the Doughboy in mind. It was once the location of the Price L. D. S. (Mormon) Tabernacle and there is a small nearby monument that commemorates that fact. The setting in Price is among the most impressive in the country. The entire base and surrounding pillars were moved from Hiawatha to Price along with the sculpture. After the move to Price, sculptor Gary Prazen restored the statue, which included the repair of a broken arm.

At the November 10, 1990 rededication, former Price Mayor and Utah Governor J. Bracken Lee was present, as were three of the county's four then-surviving WWI veterans. One of them, Ted Thomas, was given the honor of unveiling the statue. A uniformed military honor guard fired a three-round salute, and a band played a military march, ending with Taps.
​
The Doughboy is in generally good condition after being restored in the summer of 2004. The statue had been vandalized the previous April.