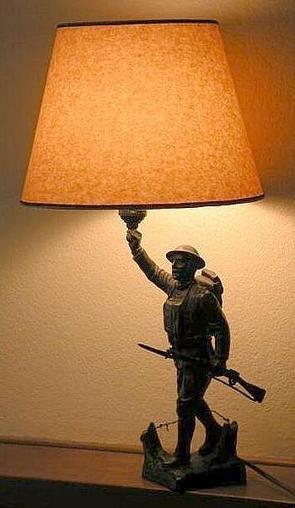 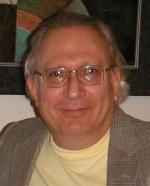 On this website, the late Earl Goldsmith and I have documented every known present and former location of Ernest Moore Viquesney's World War I memorial, "The Spirit of the American Doughboy". Whether you're looking for someone to repair your city's Viquesney Doughboy, or you're a student whose history teacher has given you an essay assignment on that "old WWI soldier statue" on the Courthouse lawn, or you're just generally interested, I invite you to browse through our files. To date the latest count stands at 135 originals or replacement replicas still standing on public display;  7 permanently removed from outdoor display; 2 destroyed and not replaced, for a total of 144 accounted for, but 6 of the 7 not on outdoor display are the remains or partial remains of originals that were replaced by replicas and are now stored in museums, American Legion Posts, or municipal facilities.

This Website originally appeared in March of 2002, as "Grandma Quater's Spirit of the American Doughboy Lamp", and was primarily concerned with a small table lamp by sculptor Ernest Moore "Dick" Viquesney (1876 - 1946) that my grandmother had bought in 1923 and was passed down to me by my mother. It's shown in the photo above.

In 1991, I tried to have my lamp researched; but no information on it nor the artist could be found. But unknown to me at that time, an eight-page newsletter had just been published in Spencer, Indiana, by T. Perry Wesley, Editor Emeritus of the Spencer Evening World newspaper. Although the main purpose of the newsletter was to document known locations of Viquesney's famous statue, Mr. Wesley had also included just about everything that was known at that time about the artist and his works. Although no mention was made of the Doughboy lamp in the newsletter, Mr. Wesley knew of its existence, but had not yet seen one.

When I published the first version of this site in March of 2002, I hardly expected a narrow-focus subject like an obscure little lamp by a nearly-forgotten sculptor would attract much attention. But since then, with the addition of data supplied by Viquesney researcher and Mr. Wesley's friend, the late Earl Goldsmith, this site has grown to include not only information on the statue locations, but descriptions of many of the artist's other creations as well. It has since won a medal and certificate, been featured in the Indianapolis Star and Coastal Antiques & Art magazine, and we have received e-mails from individuals all over the country, including relatives of the original people involved with this story. Walter Rylander, the son of the original Walter Rylander who temporarily owned the Doughboy company for four years, wrote to me, detailing how the Doughboy lamps and statuettes were once manufactured in the building in Americus, Georgia, that once housed his father's Ford dealership (it's now the headquarters of Habitat for Humanity). And Sharon Riffle, a descendent of the sculptor's grandfather, wrote, saying: "You have put enough of yourself into the E. M. Viquesney history as if you had French Viquesney blood flowing through your veins... "

​I can't imagine a finer compliment. 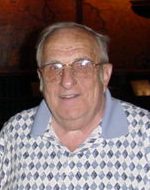 The first order of business on this site is for me to express my thanks to Les Kopel of Oxnard, California for his gracious willingness as Webmaster to undertake the work needed to present this material online. Les and I have had very frequent contact since early 2002. Having been on an active quest for information about E.M. Viquesney's “Spirit of the American Doughboy” for a few years by the time of our first contact, I was able to provide some information about a Viquesney Doughboy table lamp in his possession. While I continued to be able to help him with information as our contacts continued, it reached the point some time ago where his capabilities to search the Internet and perform other research on the topic has resulted in his being of far more help to me than vice-versa. That’s particularly been true about locating Doughboys I hadn’t discovered. Now, his willingness to manage this site has enabled the information I’ve collected to be disseminated on a wide basis. It wouldn’t have happened if it hadn’t have been for Les, and I’m grateful to him for that.

I’ve personally been to many Viquesney Doughboy locations, including two of the rare stone versions, five with the companion “Spirit of The American Navy” sculptures, and two of the four known with Walter Rylander copyrights (mentioned above and explained in more detail in the following pages).  I've also visited the original Viquesney Doughboy now standing in Nashville, Georgia, the Americus, Georgia and Spencer, Indiana, Doughboys, and the New Ulm, Minnesota replacement.

Les Kopel has visited a few that I haven't, including the one in Kingman, Arizona.  I've also visited Viquesney's gravesite in Spencer, Indiana.